​By Johanka Maher and Claude Scicluna
​This article is a synthesis of scientific literature, studies and reports.
​
Note from the authors:
The reason we decided to write this article is because we often see a large number of our clients struggling (whether emotionally, physically, mentally, spiritually or energetically) when there are changes in space weather, spikes in Schumann Resonance and strong earthquakes (as well as various planetary alignments and shifts). We believe that the following information will help readers understand these phenomena, what effects they can have and above all what can be done to better cope with the positive but intense and sometimes uncomfortable changes these phenomena cause (Part 2). This article also provides enough information to enable readers to understand space weather, Schumann resonance and Earthquakes updates and alerts so readers can gain more awareness of when these external energetic shifts are happening and how they might be affecting them.

For information on how to support your entire system and keep it in balance during these intense energetic shifts and downloads, please read Space Weather and Schumann Resonance Effects on our Health and Well-being - Part 2
​
​

​
The Earth travels through space, which is filled with ever-moving and changing energy. Due to everything being energetically interconnected (see How energy healing works), movements happening in the cosmos can create movements within our systems. There is a constant energetic interaction between us and our environment, whether it is the immediate environment such as our home, or the vast expanses of space. However, as every one of us is unique, the interactions between our systems, our environment and the cosmos will be just as unique. When we are aware of space weather events and Schumann Resonance changes, we then have the necessary information to enable us to establish a correlation between these external changes and the fluctuations in the state of our well-being. It is another tool that can help us live with greater awareness and knowledge of ourselves and the way we function.

Effects of Space Weather and Schumann Resonance on People

Scientists have long been aware of the far-reaching effects the highly charged, immensely powerful space weather events have on our technology and our environment. Thankfully, more and more studies are now being done to also identify the significant, direct effects on our physiology, psychology, and behaviour caused by the changes in Solar and Geomagnetic Activity and Schumann Resonance.

Most people are aware of the effects space weather can have on our technology, such as disruption to GPS systems, radio and satellite communication, electric power grids and corrosion of oil and gas pipelines. The effects of space weather and Schumann Resonance changes on our well-being are much less discussed; these can include psychological and emotional stress such as anxiety, flare up of mental disorders, increased risk of suicide, mental fog, temporary reduction in cognitive abilities and alertness, intense shifts in mood and emotional instability and many others, and physical stress such as insomnia, variations in blood pressure, heart rate fluctuations, increased risk of heart attacks and strokes, migraines, flare ups of existing health conditions and many others. Studies have shown strong evidence that, for example,  geomagnetic storms have a direct impact even on stock markets as they affect investors' emotional and mental state.
However, what might at first glance appear rather negative, has actually great positive connotations to all of humanity (besides being able to enjoy Northern Lights). These will be discussed in depth in PART 2 of this article. 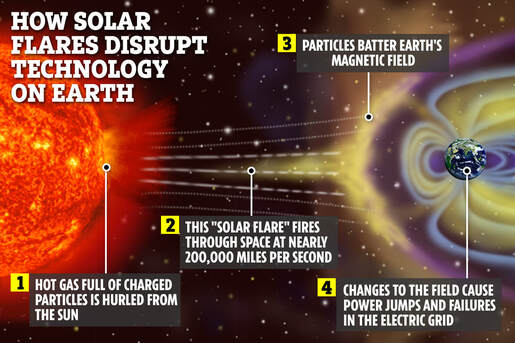 Effects of Solar Flares on Technology

Space weather starts with the sun. The sun's surface is highly dynamic and in constant motion. As the sun changes, so does the space around it. Solar flares and eruptions release enormous amounts of energy (much more energy than has been produced on Earth in all of human history) over the course of just a few minutes. These events are so powerful and colossal, they can be felt across the whole solar system, from the sun's surface to tens of millions of miles away on Earth and beyond. And when these vast amounts of energy and plasma are released in Earth-facing direction, they penetrate the Earth's magnetosphere and greatly affect the atmosphere, thermosphere and ionosphere and in turn the whole planet and everything on it's surface, including animals and all of humanity.
Over the last 200 years, the Earth's magnetic field, that shields our planet from space weather and radiation, has lost around 9% of its strength on global average. This means that the Earth and all her occupants are now more exposed to the effects of space weather than ever before. 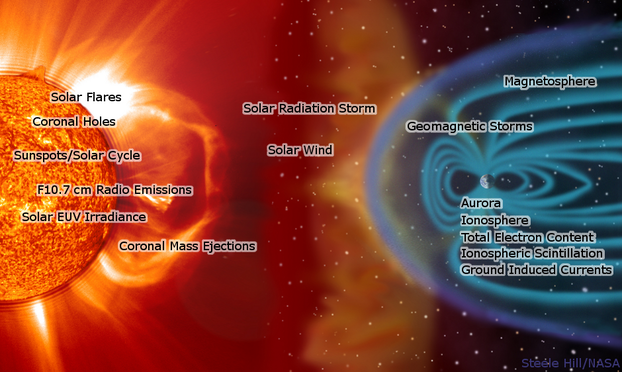 The following information is needed for basic understanding of space weather in order to orient oneself through cosmic weather reports. For more in-depth information please visit:
https://www.swpc.noaa.gov/
​https://www.sws.bom.gov.au/
https://spaceweathernews.com/
https://www.youtube.com/playlist?list=PLHSoxioQtwZcJj_9clLz7Bggso7qg2PDj 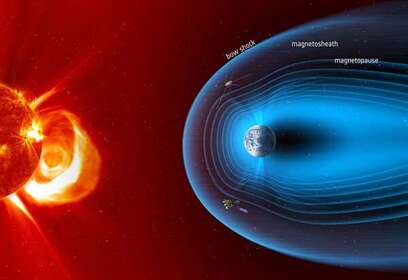 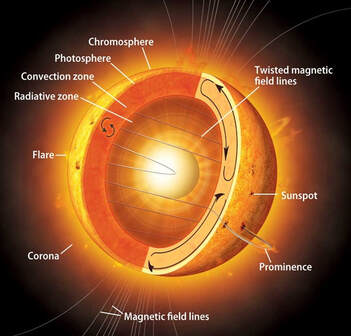 Layers of the Sun
​
​SOLAR CYCLE: An 11-year cycle (on average) of the Sun's magnetic field in which the South and North pole switch places. This process greatly affects the activity on the surface of the Sun.

SOLAR MINIMUM: The beginning of the solar cycle, when the Sun displays the least activity and has the least number of sunspots. We are currently in the solar minimum (year 2020).

SOLAR MAXIMUM: The middle of the solar cycle, when the Sun has the most sunspots and displays the most activity. Next solar maximum is expected around the year 2025.

SOLAR WIND: Streams of plasma continuously flowing from the sun's corona. The way space weather impacts the Earth and its inhabitants is highly dependent on the solar wind speed and density. Solar wind speed is measured in kilometres per second: under 400 – normal speed, over 500 – moderately high speed, over 700 – high speed, over 900 – very high speed. High speed winds bring geomagnetic storms. Solar wind density is measured in particles per cm³: under 10 – low, over 20 - moderate, over 40 high, over 60 – very high.

CORONAL HOLES: Cooler, less dense regions of plasma on the Sun's surface that allow solar wind to escape more readily into space, resulting in streams of relatively fast solar wind (between 500 and 800 kilometres per second - these are often referred to as  high speed streams).
At times of low solar activity, coronal holes are the most common source of geomagnetic storms. 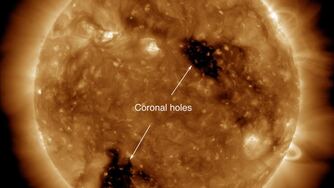 Coronal Holes
​
​CORONAL MASS EJECTIONS (CMEs): Large expulsions of plasma and magnetic field from the Sun. They can eject billions of tons of coronal material and carry a strong embedded magnetic field. The faster the speed of the ejection, the faster the CMEs reach our planet (from 18 hours to several days). Coronal Mass Ejections can cause geomagnetic storms.

SOLAR FLARES: Large eruptions of electromagnetic radiation from the Sun lasting from minutes to hours. The sudden outburst of electromagnetic energy travels at the speed of light, therefore any effect upon the sunlit side of Earth’s exposed outer atmosphere occurs at the same time the event is observed. Solar Flares can cause radio blackouts. 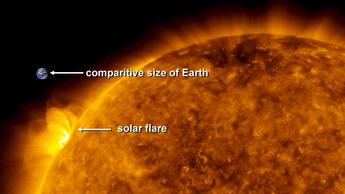 GALACTIC COSMIC RAYS (GCR): Slowly varying, highly energetic background source of energetic particles that constantly bombard Earth. GCR originate outside the solar system and are likely formed by explosive events such as supernova. Near solar minimum, GCR particles have easier access to Earth – we are currently in the solar minimum (year 2020). 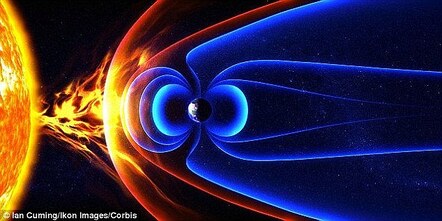 Geomagnetic Storm Caused by Coronal Mass Ejection
SOLAR RADIATION STORM: An intense inflow of radiation from the Sun. These storms are also called High Energy Proton Bombardment or High Energy Electron Bombardment. They are caused by a large-scale magnetic eruption which accelerates charged particles and causes them to penetrate the Earth's shield (Magnetosphere). Solar Storms (as well as Geomagnetic Storms) can cause Norther Lights. Solar radiation storms are rated on a scale from S1 (minor) to S5 (extreme).
​KP INDEX (PLANETARY K-INDEX): An index used to indicate the magnitude of geomagnetic storms. It ​is used to decide whether geomagnetic alerts and warnings need to be issued. The range is 0-9, with 1 being calm and 5 or more indicating a geomagnetic storm. Values are reported every three hours. 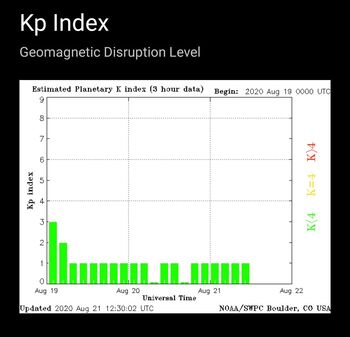 KP Index Chart
​DST INDEX (DISTURBANCE STORM TIME INDEX): This index is used to indicate the activity of a ring current in the Earth's magnetosphere that causes magnetic disturbances on the ground. A measure of this current is used to characterise the size of a geomagnetic storm. ​DST Index is expressed in nanoTeslas and the lower these values get, the more energy is stored in the Earth's magnetosphere. The values for DST Index are measured hourly. 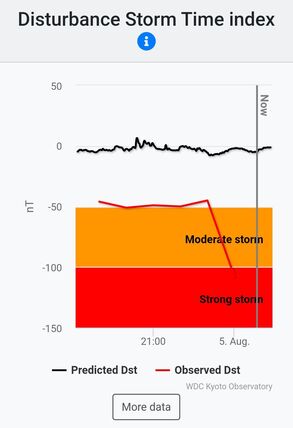 On Earth, there are about 1000 thunderstorms at any given moment, producing around 50 lightning strikes every second. Each lightning strike produces electromagnetic waves that travel around the Earth in a cavity that exists between the Earth's surface and the inner edge of the ionosphere (about 60km up). Some of these waves (with the right wavelength) combine, increasing in strength, to create a repeating atmospheric heartbeat known as Schumann Resonance (named after a German physicist W.O. Schumann). This is why Schumann Resonance is often referred to as Earth's Heartbeat.
​The more correct term is actually Schumann Resonances, as it is not a single resonance but a set of resonant frequencies, with the most predominant frequency set at 7.83 Hz. The first five Schumann resonances overlap with the human brain frequency bands (Delta, Theta, Alpha, Beta and Gamma). 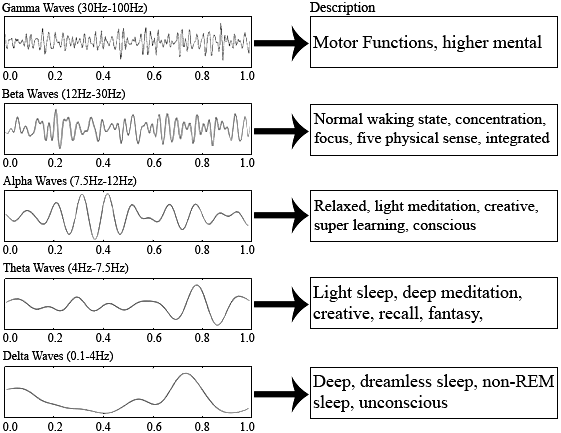 Human Brain Frequency Bands
The Schumann Resonance had been steady at 7.83Hz (with daily variations usually in the order of +/– 0.5Hz) until 2014 when this frequency temporarily spiked to somewhere in the 15-25 Hz levels. On January 31st, 2017, the Schumann Resonance had reached frequencies of 36+ for the first time in recorded history. On the 27th of February 2020, we experienced the highest surge on record, measured at 170 Hz.

Schumann Resonance Chart - Highest Recorded Spike of 170 Hz on 27th of February 2020
All life on Earth is calibrated to the frequency of the planet. Experiments and scientific investigations prove the coherence between this frequency and the human body. Schumann Resonance signal continuously synchronises the brain wave patterns, it helps regulate our body's internal clock, hormonal secretion, it affects sleep patterns and has been shown to affect blood pressure and heart rate.
​​​

​There are around 1,300 measurable earthquakes worldwide per day. Most earthquakes have natural causes, although some are man-made (caused by mining , dam building, fracking and nuclear explosions). The number of man-made earthquakes is rising. Most earthquakes occur at fault zones, where tectonic plates collide or slide against each other.

​Today, most earthquakes are measured in the Moment Magnitude Scale (Mw) rather than the increasingly outdated Richter Scale. A quake measuring 3 to 4 is considered minor or light; 5 to 7 is moderate to strong; 7 to 8 is major; and 8 or more is great. On average, there are 27 earthquakes of magnitude 4 and above a day.  According to long-term records (since about 1900), we expect about 16 major earthquakes (7 and above) in any given year.

Earthquakes generate vibrations called Seismic waves. These waves of energy travel through the Earth like a tsunami travels through the ocean. Powerful earthquakes can generate Seismic waves that can travel several times around the planet, sometimes for up to several days. Unfortunately, there is a significant lack of scientific studies on the impact of Seismic waves on human psychology and physiology.

Earthquakes are invariably preceded by a period when stresses increase deep in the Earth. Animals appear to be able to sense impending seismic events. During build-up of stress, electronic charge carriers, that can travel fast and far into and through the surrounding rocks, are activated deep below. As they flow, they generate ultralow and extremely low frequency electromagnetic waves (ULF/ELF). These waves have the capacity to interact with living organisms and to affect fundamental biochemical reactions at a cellular level.
​ 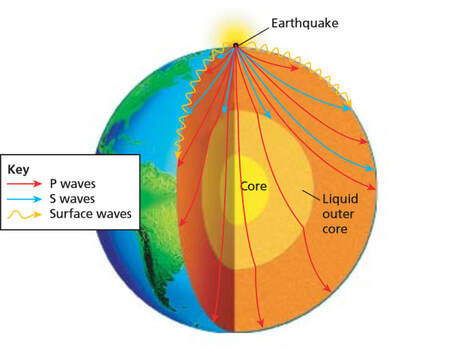